Even though I’ve lived in Toronto all my life, I have to confess that I’ve never been the St. Lawrence Market. But now that I’m attending George Brown on the St. James campus, I figure there’s no excuse not to lose that particular V-card. The vendors treated me very nicely, but in all honesty, I don’t necessarily think I was missing much. If you’re looking for variety, from meats to pastries, then I’d recommend it. But I’m used to going to markets where you see local farmers selling their own products, instead of something they picked up in the food terminal. Still, I had a good time!

While walking around, I did see something that I haven’t had in years: a prickly pear. The best way I can describe it is the perfect love child of a watermelon and a pear, except it doesn’t taste like either. It does, however, live up to its name! The skin has really tiny thorns that you can’t see—but you sure can feel those buggers when you touch them. To avoid a lot of the thorns, you can peel the pears with a paper towel in your hand, but you will most likely still end up some in your palm.

These fruit are from Mexico, where they’re eaten all year round (although they only mature in late summer—we see them from September to late October) and are considered cactus fruit; you can use them as a substitute for an apple. The flavor varies from creamy and sweet to brisk and tart. They’re popularly found in drinks with almond milk, candies and jams. Their pricing is actually very reasonable; so get them while you can! 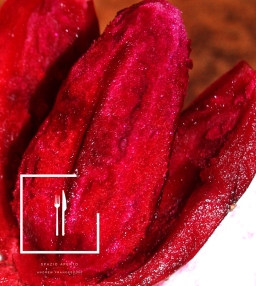 The prickly pears I bought are the most common kind that you can find. I find them refreshing and enjoyable!

Personally, I eat it raw on its own, like you would an apple, but as I mentioned, it has many uses. One that I plan trying is Prickly Pear Syrup: 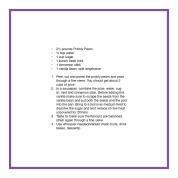